I have become one of the worst people with whom to watch panel shows, continually getting really excited and pointing out the people I know, then biting my tongue to stop myself. Yes, hello, did you realise I’ve met or know or am friends with a lot of comedians? Yeah, it’s fine. No big deal. I’m totally cool about it.

I still can’t call myself a comedian. I have done forty-two gigs. I’ll get there. Maybe soon.

Now there’s this shift happening again, watching those panel shows. For the first time tonight, I saw a person on one of those shows and said “I’ve gigged with her.” It’s going to get weirder and weirder. Life is never going to stop feeling insane. I don’t think I would want it to.

There’s this determination, I guess, to let my flatmates know who I am out of this exact context. Let them know that, although they see an odd side of me, manic and rambling and ranting, there is more.

But there is also the maniacal, rambly, ranting Leslie. There really and truly is. She is inescapable.

I was at an event in my favourite bar last night with coworkers, drinking free beer, eating free pizza, and I was astonished at how strange it was to be in a place with the amazing folks I work with, with the tremendous bartenders I’ve befriended, and with some of the marvellous comedians I know. A collision of everything that makes up this remarkable life of mine.

I always wanted to have a remarkable life, but I can quite honestly look back on Ottawa and know I did not. Certainly it could be very enjoyable, but I can’t remember what I used to do. I’d work six o’clock a.m. to two o’clock p.m. every weekday, then I’d go home and… what else? I’d usually be so tired that I’d want to have a nap as soon as I got home, and often I’d wake up hours and hours later (I’ve never been very good at napping), and if I could motivate myself, which I very often could, I’d walk myself through Chinatown, to the edge of Little Italy where my favourite swimming pool was. (It’s been a while since I’ve been swimming. The trouble is I keep getting tattoos.) There were days when my best friend Nidal and I would hang out straight after I finished work, and when I used to work with my beloved friend Marc sometimes we’d take long walks after work, have little adventures. One time we sat by the canal and he fell asleep. Tremendous company. And of course there were the weekends, the nights hanging out in the pub, the parties, the summer nights spent hanging out on the front porch drinking beers, but it seems to me I had a lot of free time and I think I do so much better being busy. I’m always busy now.

Last night when Old Rope finished, when the room had cleared out entirely, I stood on the stage and took in the room. I was still incredibly drunk from all the free beers I’d had at Aces & Eights, and I wanted some idea of what next Monday is going to feel like. I took a deep breath, picked up the microphone stand (unexpectedly heavy!), took it all in. I needed to. I need to feel prepared.

This might be one of the most significant things of my life. I’ve gone in front of people forty-two times before (more; I did, after all, go to college for theatre), but I don’t know if I ever would’ve had I not started attending a new material night in Central London.

My friend Kate and I visited Amsterdam last week. I don’t travel nearly enough, and I don’t know if I really have the right sort of brain to do a proper travel blog (my flatmate Jodie incidentally does write a really good travel blog), but it was amazing. We went to see the Libertines (I’ve mentioned them before because they’ve been one of my very favourite bands for over ten years and I have an unreasonable amount of emotion about them and they weren’t a band anymore when I got into them and now they are again and I’ve seen them live four times and one of those times was in the unbelievably tiny back room of a pub in Camden and it’s all insane), we took a double-decker train(!!) to Groningen to see the David Bowie Is exhibition (I had booked tickets for it back when it was in London in 2013, but ended up having to work that day), we had a day full of what could be mundane experiences which ended up being one of the weirdest misadventures I’ve ever had, and I became obsessed with stroopwaffels and jenever. Amsterdam is incredible, and I’ll definitely be visiting again. And travelling more in general, because I forgot just how much I love being in new places.

And on that day when we did a series of relatively mundane things and had an absolutely wild time, we were sitting on a park bench just by the grocery store closest to our hotel and we were approached by a woman. She told us she was from Humans of Amsterdam, and asked if she could take our picture and ask us a few questions. 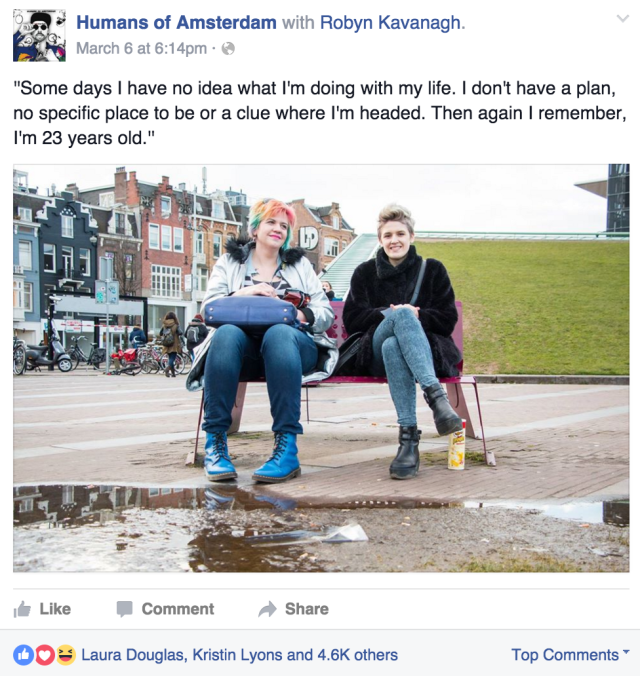 And that’s the story of how a photo in which I’m prominently featured ended up being seen by more people than I can possibly imagine, liked by upwards of 4,600 people. I can’t wrap my brain around it.

Then again, as any of you who’ve read my blog posts before will surely realize, I can’t wrap my brain around any of it.

I’ve known for a few weeks that I’m doing Old Rope on March 14th, and I still shake when I think about it.
But it’ll be amazing.
I’ll be amazing.

Because I’m so close to that three year mark of living here, I’ve been thinking about all of it even more than usual. I don’t have any idea who I’d be if I hadn’t done this. I barely know who I am most of the time as it is, but I know I’m living the best possible life for me.