The last time I wrote here, Edinburgh Fringe had just finished. I’d done my first show (just a week, but all the same), and I’d had the absolute most wonderful time.

In two months it’ll be Edinburgh Fringe again, and I don’t really know where the time’s gone.  I don’t have a venue yet for this year. I’m still doing previews. I asked the wonderful Victor Pãtrãşcan to take some photos of me. I really, really adore them, and I’ve started to design my poster. 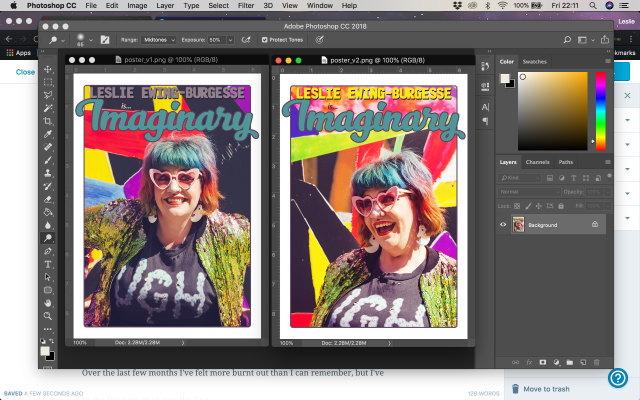 I’m just trying to keep myself moving and keep myself motivated because otherwise I’ll get bogged down by anxiety. I am, anyway, because apparently doing things nonstop doesn’t make your brain shut up!

Over the last few months I’ve felt more burnt out than I can remember feeling previously. There’s something about uncertainty. Because, the thing is, on March 1st of this year it was the fifth anniversary of my living here! And on February 6th of this year, I sent off my application for Indefinite Leave to Remain, for permanent residency. And that’s why I haven’t written anything yet this year. Because there’s only one positive way that can work out, and the fear that they’ll say no never really leaves me alone. I sent a beautiful, pristine application. Everything was in order, everything was labeled with post-it notes (fuchsia, because I am, of course, Leslie). They’ve taken the money. They’ve taken my biometric data. There’s no logical reason I can see why they should say no.

My brain is illogical.

If there’s one thing that’ll get you sentimental about every last tiny, little thing, it’s the (maybe slightly irrational) fear it’ll be taken away from you. I love every last tiny thing so, so much. I make plans for the future and am terrified I won’t be here.

But I don’t need to go on about that.

I must have lots to tell you. You probably know all of it. Here’s some of it, anyway:

In September I took a trip to Athens to meet up with my dearly beloved best friend Nidal! It was our first time in Greece, the temperature was consistently around 36°C, we went to see ancient and incredible things, we went back to our Airbnb and retreated to our rooms to take naps. We ate incredible food. We drank as many local beers as we could. Nothing could’ve possibly been better. 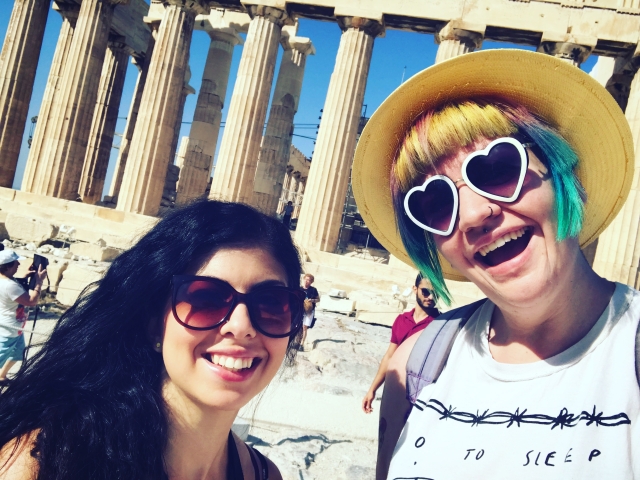 I just love my best friend so, so much. It was so amazing because, particularly drinking at an aptly-named bar called Beertime (with amazing food and mostly-amazing music) on our final night there, it just confirmed that friendships last, that you can live entirely different lives far, far away from one another and really, really not talk often enough, but still pick up like no time has passed. Also, we realised that if we want to hang out there’s a whole world out there, it doesn’t have to be me in Ottawa or her in London.

On October 13th I turned 31! My birthday was on a Friday, and I’d been wanting for ages to get some Friday the 13th flash, so I went on my own to Brighton and had a beautiful day wandering around the Lanes before going in to get my tattoo. It looks like this, and was done by Mr Heggie: 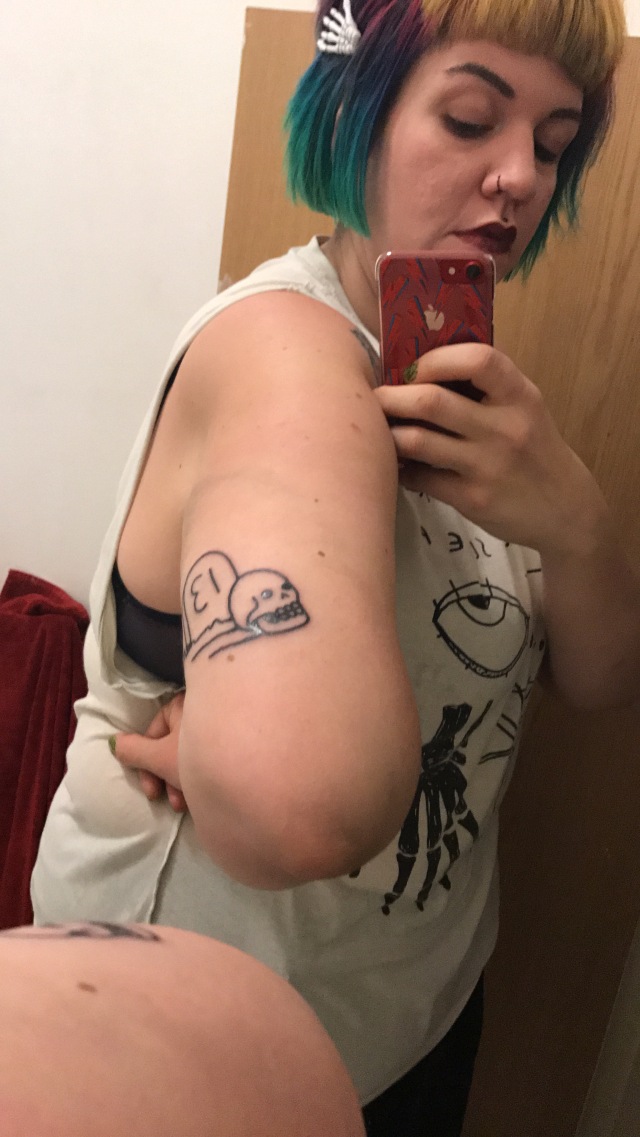 Sidebar: I’m looking through my Moleskine journal from last year to remind myself of what on earth has happened in my life over the last number of months, but because I am a nonsense human all it’s supplying me with is stuff like this quote from a story my boss told around that time: 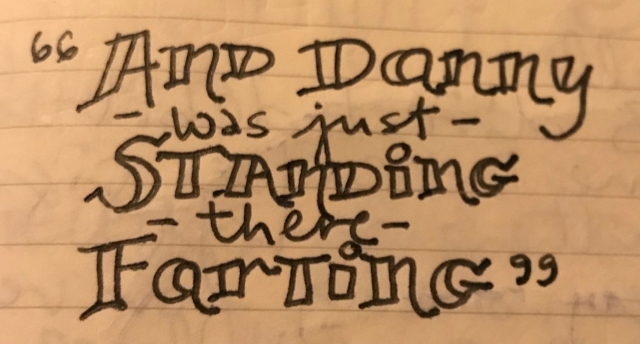 In late October I attended a comedy workshop run by my exceptionally-wonderful friend Elf Lyons, to learn how to be sillier onstage. It was two days, five hours per day, and I loved it with my whole heart. I’d been feeling really down, too, so it helped my brain immensely, and I think has improved my performances, although I think I need to make a point to remind myself of everything I learned, because there’s so much more I can do with it.

In November I got home very late one night from a gig and found an Amazon package addressed to me. I hadn’t ordered anything! I opened it, and it was a SAD lamp. I was very tired and very drunk and very confused, until I remembered I’d recently told my best friend Nidal about how I could feel my seasonal affective disorder hitting me already but how I kept putting off buying myself a lamp. She had bought me a lamp. She is the best goddamn human. I don’t know for sure how much of a difference it made in my life this winter, but I feel like it was a lot.

Our work Christmas party in December was the most fun, best thing. Here is a photo. I do not remember it being taken. 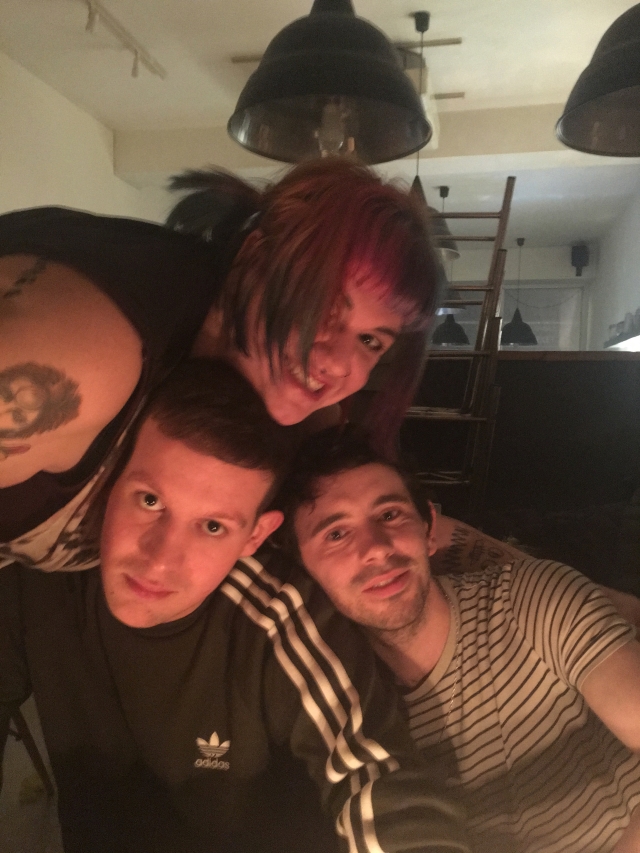 Also, because I’m still very, very proud of it, here’s the velvet painting I did of Waluigi as a Secret Santa gift for coworker-friend Martin: 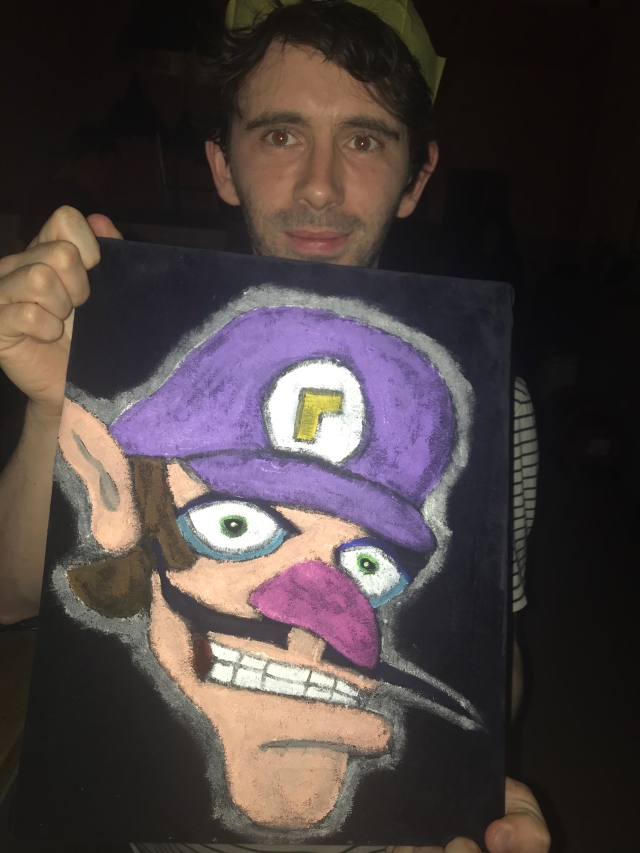 Sidebar: I’m also looking through my photos from the last number of months, so you will get things like The Velvet Painting I Did Of Waluigi.

I spent Christmas in Ottawa, of course, as did my brother and sister-in-law Chris and Jenny. It was wonderful to see everyone, wonderful to spend time with my family and friends, and I’m very happy and grateful that my spectacular Mom made it possible.

I began 2018 working on my visa application. I believe I’ve mentioned…? This meant filling in an 85-page form (only about 40-something pages applied to me), compiling a whole lot of documents, and taking a Life in the UK test. It was a relief when I sent the documents off, but as mentioned I’ve been plagued with anxiety ever since. But, see, the thing is, if I wasn’t plagued with anxiety over that I’d find a lot of other things to feel anxious about. I am, as it turns out. It’s just how my dang ol’ brain works.

At the end of January I started helping my friend Andrew O’Neill with his monthly gig, Troy Club. It’s a beautiful, wonderful alternative comedy night which I would love with all my heart even if it was something I attended as an audience member, and being a part of it means the entire world to me. The most recent one was this past Saturday night (a one-off, since it’s meant to be the final Sunday of the month), and the next one is on June 24th. I’m doing a spot!!! You should come!!!

At the end of February the wonderful, amazing, exceptional human who is my friend Vanessa moved to Berlin. Like many of the best people I know, I met her through working in the cafe, and while we were all sad to see her go, we love her and want what’s best for her.We drank a lot in her honour. 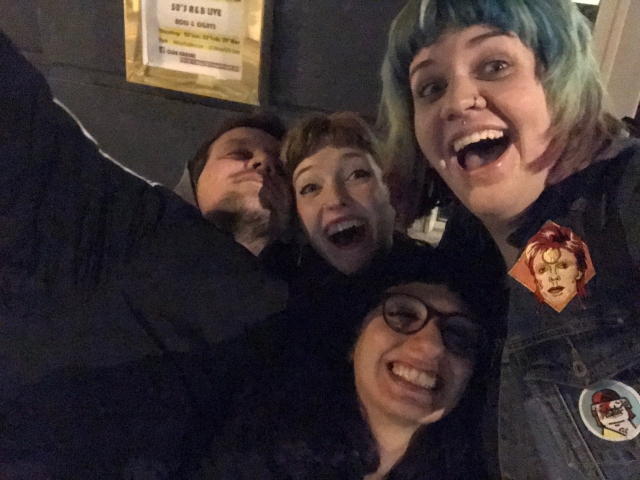 In March a ridiculous coincidence happened when I spent a morning watching live Pulp videos and wishing I could see Jarvis Cocker up close… and then a small tour was announced a couple of hours later. My glorious friend Nina and I managed to get tickets for the Brighton show before it sold out, and so we spent a day gallivanting around Brighton, drinking cans of gin and tonic, making up stupid, nonsense songs, and laughing a lot. And then… 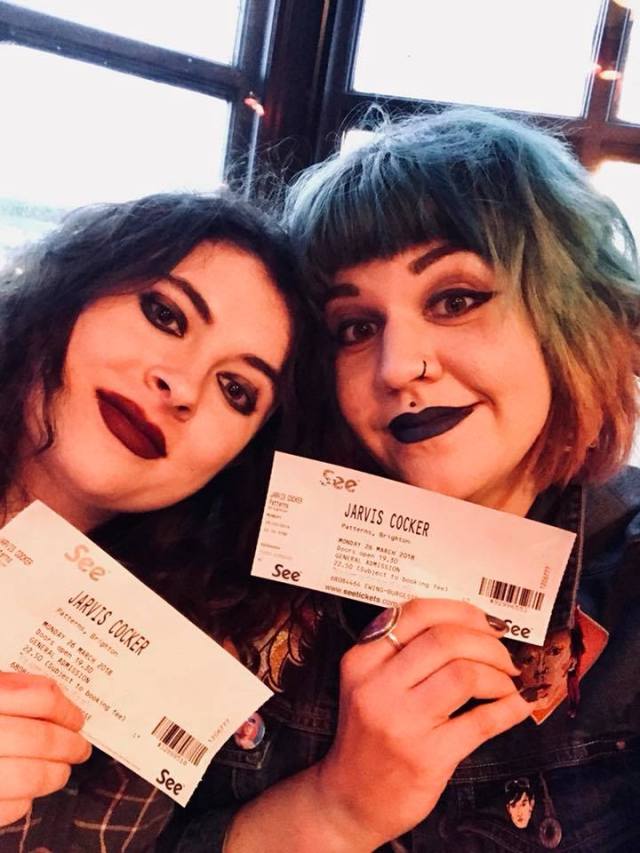 … it was time.It was incredible. It was perfect. I spent the whole show flailing wildly at Nina because Jarvis Cocker was right there. And then… 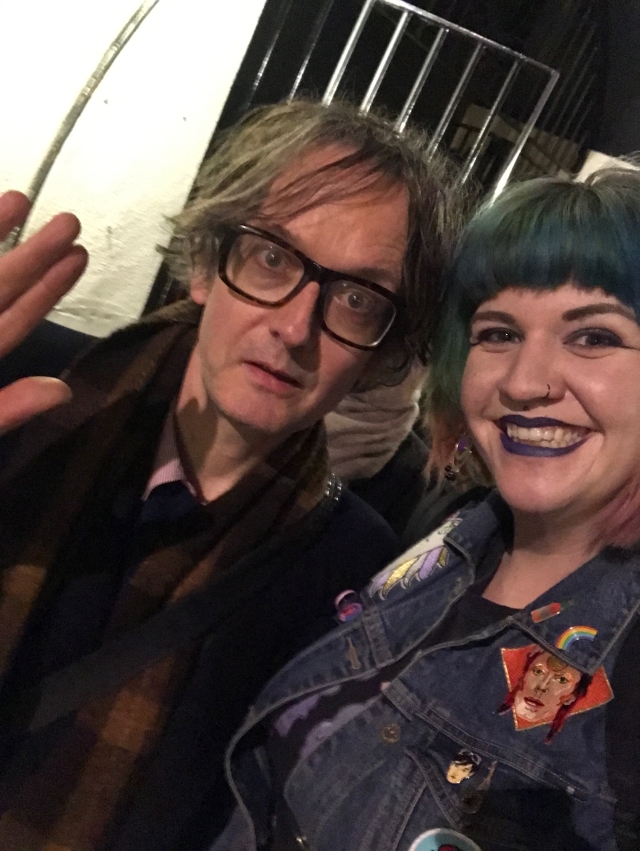 … we met Jarvis. And this was over two months ago, and I still have a tendency to talk about it whenever I get drunk.

At the end of March, my cousin Erik, who’s been living in Spain, came to London for a few days! It was so, so nice to show him a bit of what my life is like, and it was really fun to have him around! This was right after I met Jarvis, mind you, so I played Erik a lot of Pulp.

In April, I fulfilled a major comedy goal of mine when I did a spot at ACMS. Even better, the audience was exactly my audience and got so, so into what I was doing. It felt absolutely wonderful.

The other day marked three years I’ve worked at the cafe!

Last week my wonderful glorious friend Vanessa moved back to London from Berlin, because she tried but she didn’t realise until she was gone how much she loved London. I’m thrilled she’s back, and today I worked with her for the first time in three months and it was really, really wonderful.

Here are some other things:

At the beginning of the year my old domain name, theleslie.net, expired. I’d owned it on and off since I was a teenager, but I missed my chance to renew, and by the time I got around to it it had gone up in price. I spent ages working out what to do about it, and then decided to go for something nonsense. Please say hello to…

Yes, I am pleased with myself.

I realised somewhere in the midst of my extreme imposter syndrome, after that one preview, just how much insecurity is holding me back. Just how much of a difference confidence makes. In a moment of desperation I reached out to Facebook to ask for advice, to ask how to be confident when you’re not (and I know I am in lots of ways, I know I am compared to the person I was when I moved here, but it’s terrifying how fully it can slip), and I’m glad I did because I got lots of lovely, wonderful advice. And I got lots of kind words even though I didn’t ask for them (but I do always want them; of course I do). And I felt a bit askew, a bit shaken, but I felt oddly at peace with myself in the days following. I had lots of work to do, but I was okay.

More recently, though, I’ve been having trouble with the confidence thing. My default setting these past few weeks is to assume people don’t like me, or don’t like me anymore. I think it must just be the aforementioned burnout. Anxiety manifesting itself in shitty ways. Maybe it’s a bit of that same mentality I had when I was first thinking about leaving Ottawa, that self-destructive streak that told me I should ruin everything and flee, and of course I didn’t, of course I never would’ve, but there were moments where it seemed like it might be easier than saying goodbye to a life where there was nothing wrong. Maybe it’s like that, flipped on its head. Maybe, in the midst of this anxiety about whether my perfect, beautiful life can possibly carry on or if I’ll be proven not to be good enough for it, I’m trying to find problems where there are none.
I mean, I often try to find problems where there are none.

I think I’ve been afraid of writing here for months because I didn’t want to acknowledge my anxiety about this visa thing. But it is important to talk about things and, especially on a night like tonight where I was sitting at home alone feeling weird and restless and worried, important to remember how much is wonderful, as it always is, as it has been for these past five-and-a-bit years.

There’s so many exciting things coming up. And my visa thing will work out; there’s no logical reason why it shouldn’t.
And I’m going to figure out how to really, truly love who I am.
Then I’ll be unstoppable.