A spell of gloominess, and learning not to worry so much

One bored Saturday morning at work, I scribbled down all sorts of things about how I’m perceived and how I’d like to be as a person. I was mulling over that for a while, thinking about myself, and the things I could change and maybe be happier. But over thinking something isn’t doing that thing, and I’m not sure whether I was feeling gloomy to begin with, or whether mentally criticizing myself day-in and day-out was what did the trick. There was a phase where I’d spend my spare time sleeping. I say that as if it’s the distant past, when in reality it’s only over the last few days that I’ve started to drag myself out of whatever weird gloom I’d sunken into. It’s true that this month, with so many comedians off in Edinburgh, London’s comedy scene has been a bit more quiet. It’s true that it was strange to go home for a week, then come back to my perfect city only to find there wasn’t as much to do as there had been before I left. It’s true that it was strange to go from three weeks with my parents to being across the ocean from them again, not knowing for sure whether I’ll be able to get home for Christmas (fingers crossed, but we’ll have to wait and see). It’s also true that I’ve been tremendously skint, so the desire to look for things to do has been replaced by a certain self-preservation. And so night after night I made food, and collapsed into my new bed in my new flat and often fell asleep at 7 or 8. Woke up at some stupid early hour of the morning and worried about how I was perceived. And then I tried to write a blog post about it.

That blog post, in my mind, would be amazing and enlightening, and everyone would love me for it. The approval of all these people would propel me out of whatever weird slump I’d fallen into, and I’d have so amazingly cracked the code of why my brain does what it does that I wouldn’t get sad like that again anytime soon. I’d be praised for my insight and then, when I’d fixed everything that was broken in my personality and way of dealing with things, I’d be praised for how excellent I am. It was going to be incredible, but also unrealistic as anything’s ever been. I’m always going to have sad phases. I just can’t let them overtake me. I know that I don’t deal well with boredom, and so I need to try to keep myself occupied.

And I have, really; I’ve done a bit of art, and I’ve started to write jokes. “What?” you may ask about this last bit, in case I haven’t told you or, alternately, you haven’t figured out that I’d really like to do comedy. It stands to reason, really, me spending all my time in awe of comedians, and my having gone to school for theatre. I really love attention and I really like jokes, so hey! Let’s see where this goes!

To that end, I purchased a Sainsbury’s brand notebook for about £2. And, because I am Leslie Erica Ewing-Burgesse and I do these things, I gave it a title and made that title very clear. By painting it on the notebook.

This may very well be like one of those plot points on a TV show brought up right at the end of an episode then not touched on again for a long while. I don’t know how long it’ll take me to come up with enough coherent ideas that I like to put together an actual set. But hey, the cogs are a-turnin’, and now that I’ve dragged myself out of Gloomsville, I’m actually more excited about this than I am terrified.

I guess my main revelation of late is that I give too much thought to a lot of things that really don’t matter. I throw myself into a panic over tiny things, and feel too paralyzed with fear to fully be the person that I could be. I had a conversation with a friend a while back about how we both act foolish so much of the time that we don’t know if we could be taken seriously if and when we wanted to. Said conversation happened over an extended period of time on Twitter, and she asked “How can we fix this?” just as I was hit with a spell of (quite likely beer-assisted) confidence. I declared that probably our best bet was just not to care, and that strikes me now as a certain sort of wisdom.

Q: What if people don’t take me seriously?
A: Who cares if they don’t? Make them take you seriously.

Q: Isn’t it easier to play dumb than to risk being wrong in my theories?
A: Who cares if your theories are wrong? At least you’re trying to figure things out for yourself!

I came back from Ottawa (and oh Ottawans, with all your beautiful faces!) motivated to make positive changes in my life. I highlighted many of these in what ended up being a very long attempted letter to my darling friend Laura, but then I waited too long and the motivation faded away. I just need to find it again, really. I just need to believe in myself, because I’ve accomplished some pretty amazing things in my time.

I had belief in myself as I was writing the letter. See? 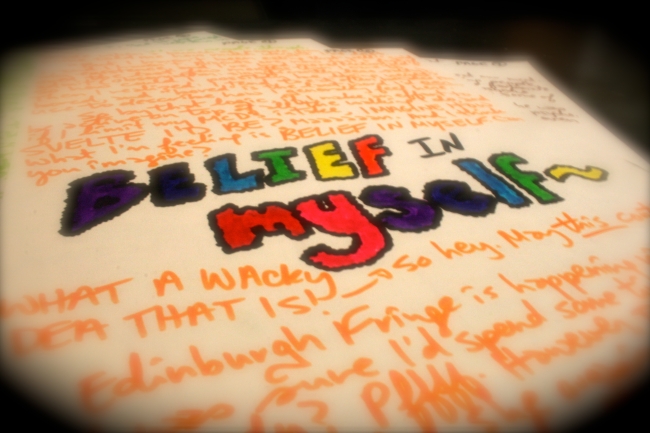 It’s weird to go home and come back, I have to tell you. I had a glorious week around my family (including my brother and sister-in-law, surprise visiting at the same time I was visiting!), and around as many friends as I could manage. I had a couple of late nights at the pub my best friend Nidal and I used to go to all the time, and I spent time around friends and their excellent babies. I saw two of my darling friends get married. It was amazing, and then I left. I think it’ll always be incredibly difficult to leave, but it was definitely easier to come here knowing the life I was coming back to.

When I came home, it was to my new flat. I’m really am absolutely in love with my neighbourhood. It’s so much more incredible a place than I could ever have imagined living. Before I moved over here, I’d daydream about London, and I’d daydream about Camden Town only ever being a tube ride away. And here I am now in Tufnell Park, which means Camden Town is about a twenty minute walk away. It takes about as long to get from here to there as it did for me to get from my Ottawa apartment on Gilmour Street to Rideau Centre. Imagine that! Are you imagining it? (I suppose you have to be relatively familiar with Ottawa to do so; it’s okay if you can’t imagine it.) And hey, bonus, I share a neighbourhood with one of my very favourite comedians? Andrew O’Neill is accustomed enough to me that he and I ended up sharing a tube ride after Old Rope the other night. And we crossed paths again yesterday as I walked to Camden Town (about twenty minutes’ walk, I cannot stress this enough!) and he biked by. We waved at one another. The first I ever heard of him was when he was on Never Mind the Buzzcocks last series, and now we’re neighbours. London is astonishing.

And I’ve said there’s no limit to how good this city can be, and this remains true even when my brain isn’t willing to accept it. My time since my return has had a few really incredible experiences.

For one, I was able to see Russell Howard on the night of the very day I returned to London (this after seeing a really excellent gig in the early evening, that being Psycho Delia in Holborn Library). He was one of the acts at Phoenix Fringe, which was Tiff Stevenson & co.’s week-long London-based response to Edinburgh Fringe. What this means, dear audience, is that I was able to see one of my very favourite comedians, who I was hoping to maybe get a chance to see in a small club eventually, in the very pub I go to every Monday for Old Rope. It was incredible.

Because of a particularly intrusive fan I wasn’t able to meet Russell Howard that night, but don’t you worry, gang! He was at Old Rope last week! Not only that, but I was had the chance to speak to him about a common interest of ours, which is to say Rufus Wainwright. We talked about Rufus’s shows. Russell Howard sang a line from Poses. Life is kind of ridiculously good. And, oh heck, here’s a photo, from before said conversation. Tiff Stevenson brought me over to meet him. I’ve mentioned she’s the best, right? 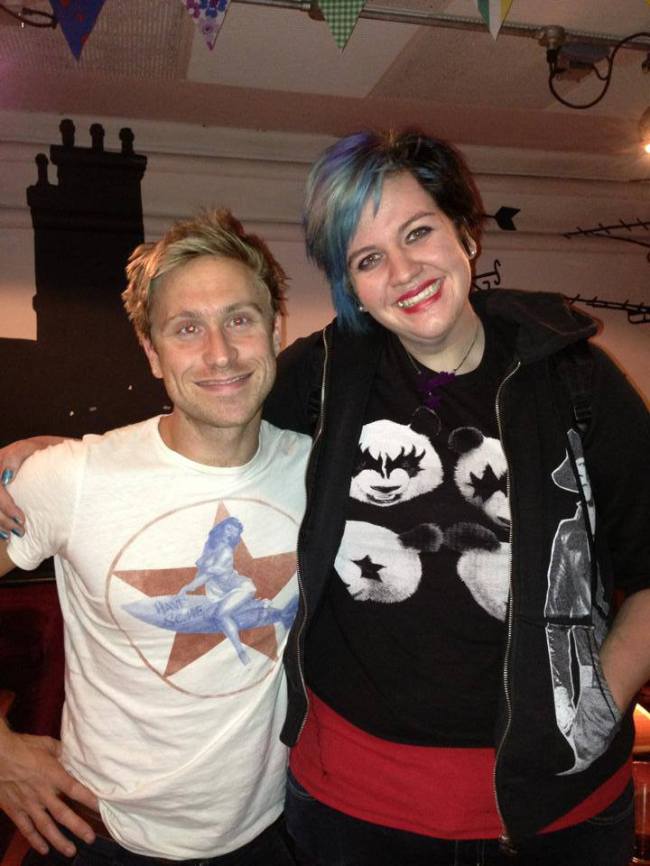 There is that weird thing that happens when you’re feeling upset and realize you don’t have any justifiable reason to do so where you start feeling bad about feeling bad. While I have had moments of this lately (because look at this life I am living, it’s better than I hoped it’d be), I’ve just mainly tried to shrug it off and do what I can to fix it. Admit I’m not feeling great, but that I will again. And I think that’s all I can really do.

Life is extremely exciting. There are still disappointments, such as my paycheque that I was so certain would be a good one. Nope! Turns out I’ve got about £145 spending money to last me the entire month! But hey, a life this good has gotta come with its challenges, hasn’t it? I only need to get through four weeks and then I’ll have more money! That’s not so bad, is it? Is it?!?

IT IS GOING TO BE OKAY.

And maybe this wasn’t the poignant, earth-shattering blog post I hoped to write, but I think that’s okay. It took going away and coming back for me to start to realize that I actually do live in London, and so now I’m starting to settle into the idea, I think it’s time for me to become the best person I can possibly be. Here I go, gang!

One thought on “A spell of gloominess, and learning not to worry so much”