On one of my first days in London, I happened to be looking at Twitter when I saw mention of a contest. The prize? A spot on the guestlist for a party thrown by Tatty Devine, a favourite jewellery company of mine. The theme of the party was Holi, an Indian festival celebrated by people wearing white and throwing powdered paint at one another. This seemed like something that was a little bit out of my comfort zone and, therefore, absolutely worth trying out (I’m taking this “try new things” business rather seriously after all), so I entered the contest.

Imagine my surprise when I actually won!

Wednesday night was that party and, in my travels during the day, I located a cheap white cardigan to wear, since white is about the only clothing colour (shade?) in which I own absolutely nothing. I bought it at Tesco (which is to say, a grocery store). I wasn’t exactly going for high fashion, considering I knew it was going to get destroyed anyway!

I ran a bit late, as I am occasionally wont to do, and started to worry along the way that maybe I wouldn’t be let in because I wasn’t on time. I had read online earlier that an invitation didn’t necessarily guarantee admission. Did that make me get there earlier, though? Evidently not! But I waited out in the freezing cold once I arrived, and although a lovely lady came by and said there was barely any room left in there, I was eventually let in.

Once I was in (imagine how cool it was to be found on a guest list for an event like that), I was given a gift bag which, among other cool things, contained one of the necklaces from Tatty Devine’s spring/summer collection. Thanks, guys! 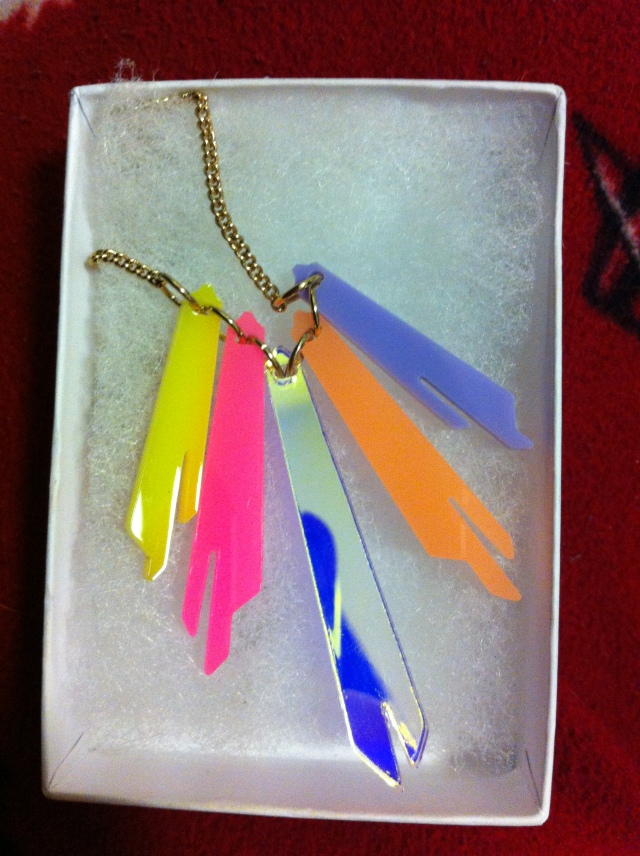 I actually love it a lot.

So I’m at this party where I don’t know anyone, which is not a feeling I’m particularly used to, and it turned out Dee Plume (formerly of Robots in Disguise) was DJing the event! I’m a massive fan of hers and had been hoping to see her do an open mic night or a DJ set since I arrived here, so this was a most excellent surprise.

It was an even better surprise when she instantly recognized me (I went to see her twice in 2011, and speak to her sometimes on Twitter) and took off her headphones to come say hi. All at once, someone I hugely admire became the person I knew best at this party. That’s how unusual a night it was. I’m bad at just chatting to strangers as well, so mostly I stood around awkwardly, but I was there. I was living my life! (Plus there were free drinks.)

When 9:00 p.m. rolled around, it was time for the main event. Although I’d prepared for the occasion, I still felt a bit hesitant to go into the paint room, mainly because I didn’t know what to do with the stuff I didn’t want to get damaged. I trusted a helpful stranger when she told me I could leave my coat on a table, though, and I went into the other room. It was insane and amazing, literally people throwing handfuls of multicoloured powder at each other. It was a mess, in the most glorious of ways. 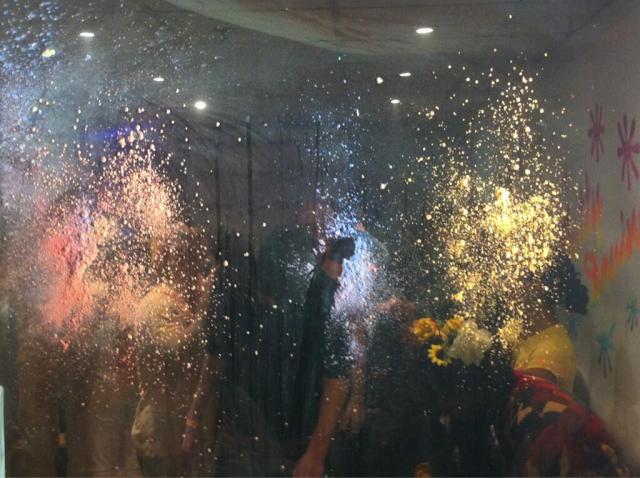 It didn’t take long to get absolutely covered in paint. After a minute or two, I decided that was enough of that, and headed to the washroom to get the paint off my hands. While I waited in line, Dee walked by and laughed when she saw how messy I’d gotten. Once I felt adequately cleaned up, I headed back into the non-painty room (although still fairly painty, on account of all of us traipsing through it), and Joseph Lynn, who’s making a documentary about Dee, was kind enough to take a picture of me and her. 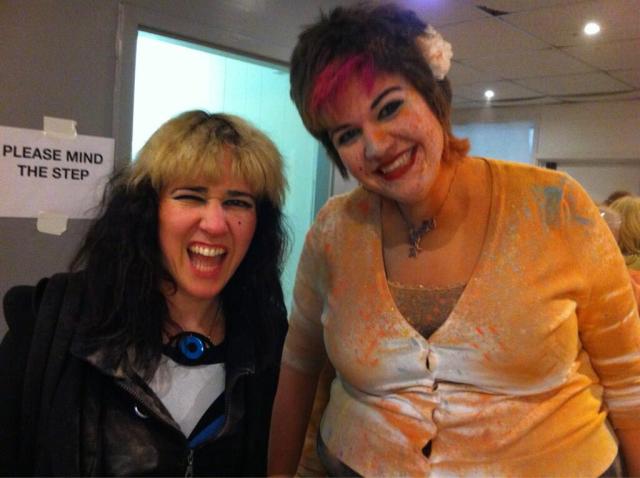 Dee! Me keeping my distance so I didn’t get paint all over her!

And then, in a move quite baffling to someone prone to fits of obsession (to put my situation quite kindly), Dee offered to take a photo for me, because the paint was so specifically splattered on my face. Well, who was I to say no to that? 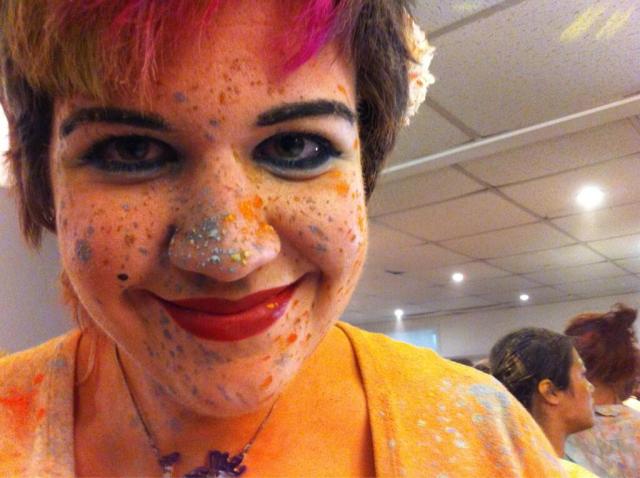 I actually had a number of people comment on the paint on my face. Facial talent, I guess…! Weirdly shaped enough to catch colourful powder in a way that looks kind of cool. That should get me far in life, right?

I had the good fortune of meeting the owners of Tatty Devine, Harriet Vine and Rosie Wolfenden. Both were absolutely lovely and seemed to really be enjoying their party. And this is the sort of thing that seems totally normal in the moment, and which I freak out about later…! Which basically sums up London in general. 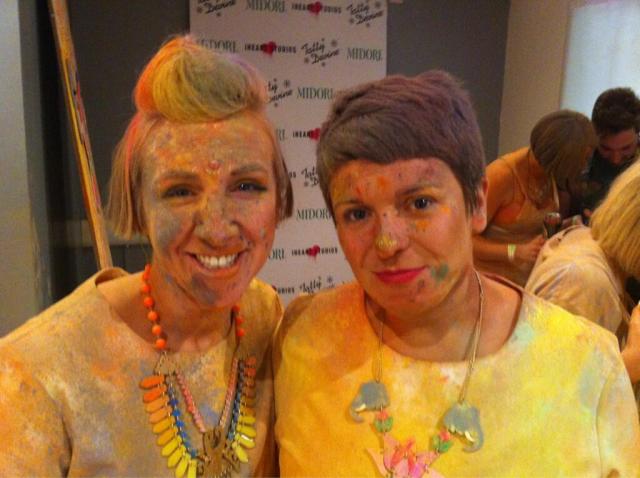 Thanks for starting up a really cool company, ladies!

All in all, it was an absolutely incredible event, and one that I couldn’t believe my good fortune at being able to attend. I’d call it a once-in-a-lifetime experience to be at an event like that, but now I’m living in London, who knows?

Fun bonus meeting other attendees on the tube afterwards, too. Three painty people in a carriage full of confused passengers. Well, I assume confused, but possibly they don’t care on account of… well, London!

Now, if you don’t mind too much, I’m off to take advantage of Tatty Devine’s Easter weekend 20% off sale (and the £20 gift voucher my glorious brother and sister-in-law bought me for Christmas) and get the necklace I’ve been wanting most! (Special bonus: I made £35 for a day’s work yesterday, but that’s another story for another time.)

One thought on “Adventures in being on a guest list”